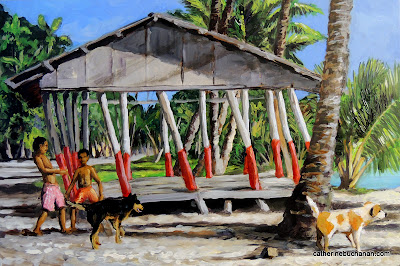 The Leaning Fale of Olosega

Not destined to become a tourist destination and it's probably fallen down since I took this picture ten years ago, but this is not an uncommon scene in American Samoa. Kids and dogs playing on the beach in the late afternoon.


Dena asked;
“What is the difference between painting a small picture and painting a mural?” 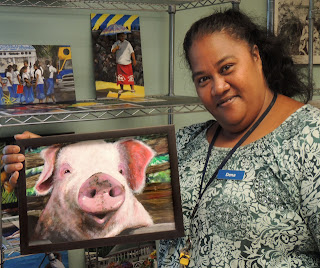 This was a question about the difference between how another painter and I work. It is about technique, but also why different artists choose to work the way they do. I asked Dena questions until I found out why she had asked. A few years ago Wyland painted one of his giant whale murals on the government building in view of the Feleti Barstow Library where I’m currently painting and Dena works. She was fascinated with the process over the course of the week that the mural was being painted.
Wyland paints like art is entertainment. She described him, “He played rock music all day and danced around with a paint sprayer shouting stuff like “Oh yeah!” to the crowd from his scaffold.” I can totally picture that. He finished the giant painting in record time. The next palagi (foreign) painter to do a public demonstration is doing things a little differently. I sit quietly at a table with small brushes and paint about one square foot per day. Wyland with his spray guns and assistants did about 200 times that each day. I would have to say the difference is personality since that has a lot to do with an artist’s style and how they choose to work. Wyland is a showman, an exceptional salesman and cranks out crowd pleasing murals in record time. He gets the big bucks and loves to perform. I would rather hide in my room with a bowl of chips and will not be raking in the dough with this strategy. This is my first experience painting in public. I enjoy answering questions about art for people who have not seen many painters at work, but all Wyland and I have in common is that we are both foreign.
The value for me in this project has been the connections with people like meeting the people I’ve been painting. Dena held up her favorite painting so far and chose it because it looks so real. I’m quite fond of the pig too. If anyone wants to pay me to dance and shout to a crowd while I paint it huge on their building I’m game, let’s talk.

Many thanks to Tom Drabble at Sadie’s (sadieshotels.com) and the Feleti Barstow Public Library (on Facebook) for supporting this project, which includes a room to hide in and a quiet corner to paint.
Posted by catherinebuchanan.com at 8:38 PM