About The Buddha Project 100 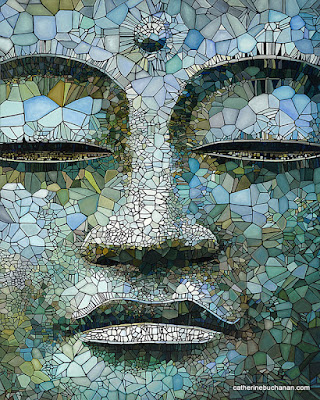 We began The Buddha Project 100 in 2012. Our collaboration came about gradually when Arthur Deak asked if I would show him painting techniques he particularly wanted to learn. We painted on the same canvas to more easily see what each other was doing. We finished and started another as we work well together. After a few more paintings were completed I suggested we do 100 since I was amazed by what we could accomplish together. Two pairs of critical eyes, our combined life experiences and varied skill sets give us the ability to see more critically. Quickly we moved to larger canvases and kept going. 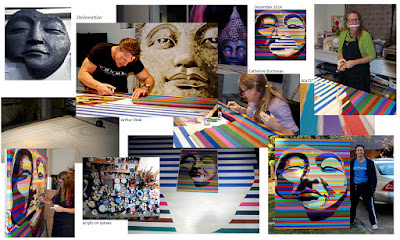 Learning new techniques and experimenting with styles and mediums is part of the project. We begin with photographs that we take in quiet places such as museums, gardens and the natural world, and search our photo files looking for images to use as a starting point. Some we manipulate on the computer, others transform as we work on them. So far we have completed twenty seven pieces. 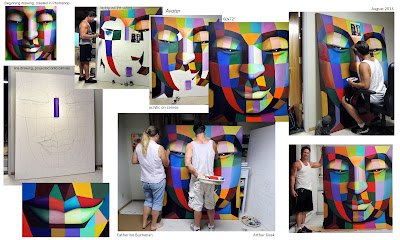 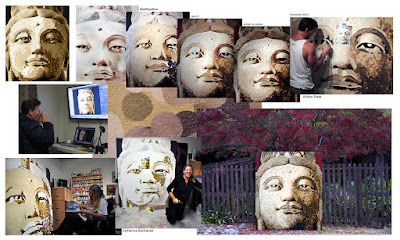 Posted by catherinebuchanan.com at 11:33 AM No comments: Links to this post


Imagine a warm, tolerant country where people enjoy strangers. I signed up to crew on a sailboat to experience the beautiful, clear ocean that photographs of the area promised. I knew nothing about Bahamian people, although the beauty of travel is the unexpected. Experiencing light bouncing off a turquoise sea under cobalt skies with towering white clouds and a pristine beach on the horizon swelled my heart, although it wasn’t until I stepped off the boat that the real magic began. 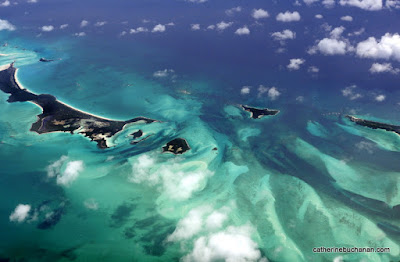 The first taste of Bahamian acceptance came from customs officials on the remote island where we checked into the country. We had been slammed on the crossing from Florida by an unexpected storm. We were three strangers sailing together for a few months after finding each other through a crew list ad that the captain of the boat had placed online. Tired and sweaty we marched into the office to fill out paper work. 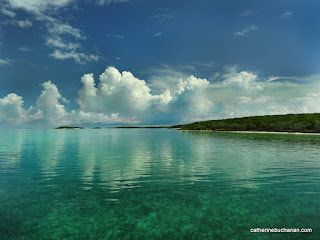 Customs and immigration each had their own desk. Forms were handed out and questions asked about what we did to make a living. The officers also wanted to know who we were to each other. Three unrelated people who had met through an internet ad do not make the most reliable entrants into a country. We were mistakenly assumed to be husband and wife with a teenage daughter, but our passports told another story.   Announcing that we were “just friends” raised joint eyebrows across the desks. Our assumed daughter, a European girl in her early 20’s, did not look up from her phone. She answered questions tersely with a single word clearly annoyed that her texting was being interrupted. Her butt and cleavage hugging tiny shorts and t-shirt declared her most curvy features, giving the men’s eyes something to peruse as the captain filled out pages of questions about the boat and our intentions in the country. 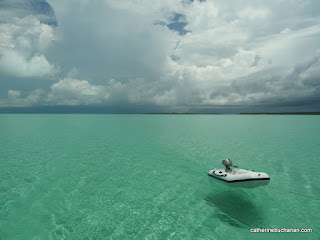 What an odd group we were. I wondered what they could possibly be thinking. I’m not a small woman, the captain was half my size and the girl resembled neither of us. We looked like kidnappers in the sex trade industry. The captain hedged his answers and left many of the questions on the form blank. At that point U.S. officials would have marched us into individual rooms to extract our real stories, criminal activity assumed.
The Bahamas have their sha­­re of money laundering and drug running. The officers asked questions then glanced at each other. One man took our passports into another room to make a phone call. I watched him through the open door. He looked concerned. The other well-pressed man in uniform stayed at his desk with our peeved captain’s incomplete form on his desk, a large hand weighing it down. Our only common bond was the desire to travel by sea. While walking to customs and immigration I had been instructed by the captain not to say anything, to let him do the talking. That made me wonder what he was hiding. Blindly trusting strangers isn’t always smart, but I do it anyway because sometimes things work out just fine. 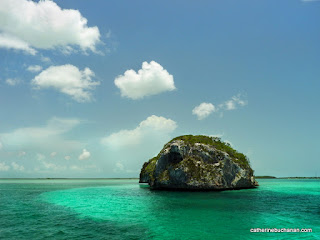 When the officials asked the captain questions he held his hand to his ear as if he couldn’t understand. It turned out that his hearing aid didn’t pick up the lovely, soft-spoken Bahamian voices, but I didn’t know that at the time. He looked cagey. Our non-daughter moved her phone closer to her face to see it with her dark sun glasses on and turned her back to everyone. The captain made a disparaging remark about the length of the forms, complaining because he had not been required to fill them out in the past. He crossed his arms and smoldered. The other official returned. He sat down and put his hand on top of our pile of passports. That left me face to face with two big guys who had our fate under their palms and two people I barely knew rudely ignoring them. For me that is a recipe for becoming the sweatiest, most chatty person in any room. The silence made my tongue hurt.

On the wall behind the desk a large hand-painted relief map of the island showed our location. I asked where to buy carburetor cleaner, casually mentioning that the engine on the boat had been sputtering. I did not disclose that during the storm it had sucked in seawater and died with spark arresting finality. I assumed they might not want people in their country who may need to be rescued. Minimally fixing it required a spare spark plug and the tool to change it. Sadly we had neither, but finding a mechanic seemed prudent even if I was supposed to keep quiet. 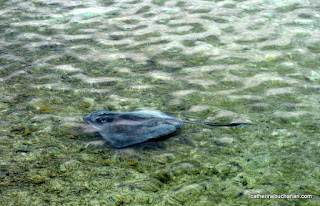 Both men smiled. With surprising hospitality they told us about the mechanic on the island giving names and details. They calculated how many minutes it would take to walk to town. It was then I realized we had landed somewhere quite different. Our passports were stamped, handed back and the forms shoved in a pile on the side of the desk while wishing us the best for our time in the islands. Their concern surprised me, as well as how quickly they switched gears from questioning to helping us. Obviously our passports checked out and luckily bad manners on our side had not ruffled Bahamian feathers. 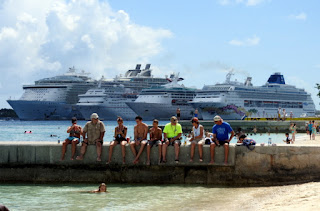 An injured knee cut my sailing trip short. I left the boat with the clear water over the banks happily etched in memory. Every friendly exchange with Bahamians convinced me to stay longer. In Nassau I found a room in an old hotel overlooking Junkanoo Beach. Wildly entertaining is a place where people go to see and be seen. Cruise ship patrons showed up in droves then trundled back to their respective staterooms satiated and sunburned. 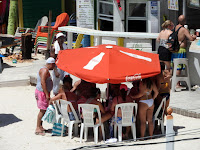 After the daily tourist exodus Bahamians reclaimed their beach. The men’s volley ball team practiced, swim meets ensued and kids flipped off the wharf over the “no diving” sign with unrestrained joy. Mothers and fathers floated with their babies in the gentle surf. After dark couples walking hand in hand disappeared into dark shadows. The daily rhythm of the beach repeated beginning each morning with the migration of tourists. They hunkered under umbrellas sipping beer, bellied up to open beach bars to pound shots, lined up for Zumba, rented beach chairs and generally let it all hang out. At night the toys and furniture were put away and the beach returned to the residents.

There did not seem to be any animosity over this arrangement. Bahamians made money midday when the blazing beach was least hospitable then enjoyed the cooling breeze of late afternoon free of intruders. A few expats and people like me who had not arrived on cruise ships wandered around or swam alone unnoticed. 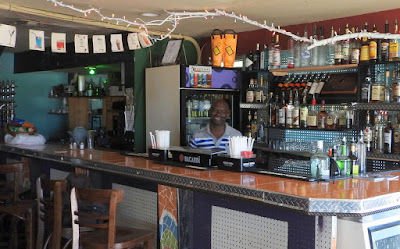 At The Daily Grind Internet Café across from the beach good food was served with a smile. Teddy (the owner) and his employees greeted guests with genuine big-hearted warmth. I enjoyed conversations at the coffee shop. A former school teacher now cab driver, the maintenance man, people who worked the beach scene and of course the owner who is also an artist.
I rarely walk the same way twice and never remember what pocket I shove things in. Time in the Bahamas altered my loner habits. The Daily Grind staff made me welcome as a regular, a first for someone who moves around often enough to be taken for a fugitive.

On the street both men and women greeted passersby with, “Hello beautiful”. Lost downtown I pulled an abrupt about face and crashed into a woman on the sidewalk. She accepted my apology with one of those big Bahamian smiles and said, “No problem, where are you trying to go?” then showed me the way. And with one hand on my arm and a wink she said, “Hon, we’re used to tourists, enjoy your day”. Exceptional kindness simply rocked my world.
My last days in The Bahamas I asked if I could photograph the people I met to remember the joy a smile brings. Remarkably nobody refused.


Hiking in Hawaii and the South Pacific I’ve seen the odd wild pig, but rarely and in small numbers. Recently on Kauai we pulled over to watch no less that one hundred wild pigs milling around in a field. Polynesian wild pigs have a distinct silhouette with a bristly ruff along their spine. The piglets come in a variety of spots, solids and stripes. The herd politely ignored us. Some lay calmly in the grass while mynah birds cleaned their hides. After taking a few pictures the woman who lives in this unique wild kingdom walked to the fence to talk with us. Turns out six pigs showed up initially then over the years increased in numbers. Late afternoon feeding time brought a variety of critters to the table. Doves waited patiently on the lawn in great numbers, horses plodded over, roosters and chickens strutted boldly among the trotting pigs, cats sat on fences and dogs oversaw herding whether or not it was necessary. There was a moment when animals filled more space than the landscape. The estate is a no-kill nature preserve with great care invested in the animal’s well-being. The creatures live side by side with rare squabbles and tourists stop along the road to share a moment of astonished wonder. Harming or teasing the animals is strictly not allowed. The location is a travel challenge.
Hint: Look toward the mountains while driving on Kauai north of Kapaa. 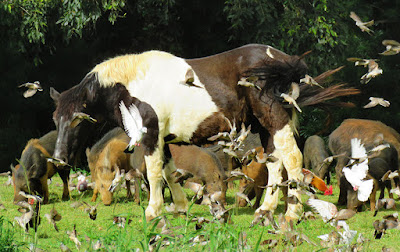 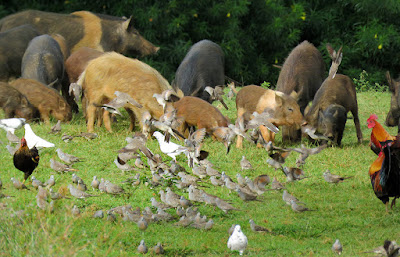 Posted by catherinebuchanan.com at 10:56 PM 2 comments: Links to this post