One of the many reasons for writing a blog, besides making an art sale or being contacted by a major publication to pay me to write for them (hello, dream on) is to enjoy reading and responding to comments. Interaction even for reclusive people is fairly important. Blogging is a little like moving to a new city where everyone is a stranger, it takes time before anyone gets to know you so thank you to anyone who does read this. Unfortunately spam comments fill my mailbox daily. I had to change the comments filter so only people who follow my blog can post on it, limiting the odds of interaction from the whole world to a group who could fit in two minivans. Turns out "Anonymous" comments contained links to other sites like "adorable golden retrievers" or "puppy love". When followed some very skanky stuff popped up. Great. Spam, porn and DECEIT! Duh Catherine. Like there is such a thing as ethical spam. That's like hoping that if you do step in shit that maybe it won't smell. So my apologies to anyone who even thought to leave a comment because I do love to get them and now it's only possible if you sign up.
There is so much beauty in the world. This is an unretouched photo of a giant bubble that my friend's little girl made. It's floating through Kapuaiwa Park on Molokai, a grove of 1,000 palm trees creating a magical rainbow landscape. In my perfect bubble world there is no need for spam and people leave kind and engaging comments. Hey, no pressure. 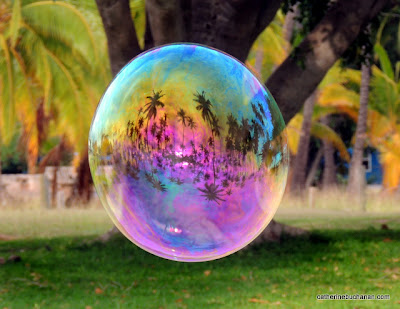 Posted by catherinebuchanan.com at 9:46 PM No comments: Links to this post


Happy Earth Day!
My friend David asked: “What is this whale tail you are building? Just something you needed to do?”
Pretty much, it was one of those ideas that stuck like caramel on a molar. After I told a friend I was giving up on the idea I plunged into melancholy. Deciding to go ahead cheered me up as if I’d won the lottery. That is probably the mechanics of compulsion, only this time it was over building a sculpture instead of buying cigarettes. I quit smoking so keeping my hands busy is also important.
The six paintings of native Hawaiian animals on display at Ho’olehua Airport are life sized and I wanted to include a whale, but the airport is small. Painting a pod of Humpbacks on the runway or turning an airplane into a whale would involve gaining permission akin to taking the space shuttle up for a spin. Molokai Fish and Dive, a company that provides whale watches, snorkel trips and much more recently bought the old gas station in town and moved in. The corner has charm and character, which is an odd thing to say about a gas station, but I stand by it. The owners didn’t hesitate to say yes when I suggested a life-sized whale tail coming out of the pavement in front of their building.
Whales are visible daily in the channel between Molokai and Lanai while they visit the islands from Alaska to give birth and frolic in the warm water. The view from the shop where I built the tail included whales jumping, slapping their tails and playing with their babies along the edge of the reef, which was seriously grand. Each year their numbers have increased. Between Alaska and Hawaii whales are no longer routinely hunted and I hope that will be true in every ocean. A world without whales would be sadly diminished. It is difficult to grasp a whale’s immensity.  The tail sculpture will allow people to experience the magnitude of whales the way we know best, by directly comparing them to ourselves.
Circumstances to build the tail lined up as if gnomes lived under my bed. When I needed help people showed up, materials were donated and I had the luxury of time, which is rare.  I met the Sea Shepherd crew from the Steve Irwin when they were heading to Antarctica to save whales and I really wanted to join them, but it wasn’t possible. Their dedication inspired me to do this project. I hope people will take pictures with the whale tail at Molokai Fish and Dive and share their images. Consider it a vote in support of these truly exceptional creatures.

The following pictures are the process of building the tail. Many thanks to Paddy Evans for his unfailing patronage, for donating the plywood, nails, Bondo and paint and for endless cheerful encouragement. Susan, how did I not get a picture of you? Thank you for giving the whale a home!

Thanks Sherry for all the photos, help, child labor and good laughs. Couldn't have got it done without you and your kids!


Posted by catherinebuchanan.com at 1:44 AM 6 comments: Links to this post