The 2013 calendar for Sadie’s Hotels in American Samoa is being printed this week. Here's a sneak preview of the front and back cover and a few sample pages. This year’s calendar is comprised of the best scenic photographs I’ve take of these stunning islands. Breath taking hikes (literally) over the mountains and through the jungles of Tutuila discovered many of the images. The September photograph of Pago Pago Harbor was taken from the top of Mount Alava in the National Park. A few trails are so steep that ladders and ropes have been installed to assist hikers and fortunately there are no snakes or man-eating predators in the region. Near the equator light plays off lush vegetation, vertical mountains and wild coastlines with an intensity that leaves a lasting impression on the soul. The full impact can only be experienced in person, while the photographs hopefully tempt you to visit.
In upcoming posts I’ll reveal the best and goofiest of American Samoa. While the scenery is stunning, there are some things you might need to know before you travel. Or just go, if you like surprises you won’t be disappointed. I’ll also post a map that shows where the calendar images were taken. All travelers will find something of interest. Navigating the wilds of American Samoa requires fitness and diplomacy. Some areas require permission, but a few of the photographs were taken along the main road, easily visible from an air-conditioned vehicle. 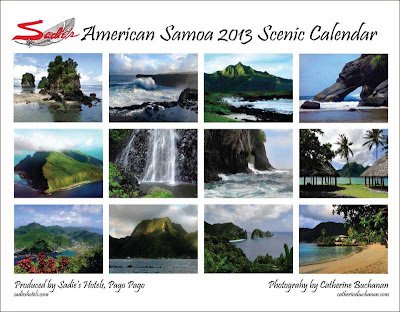 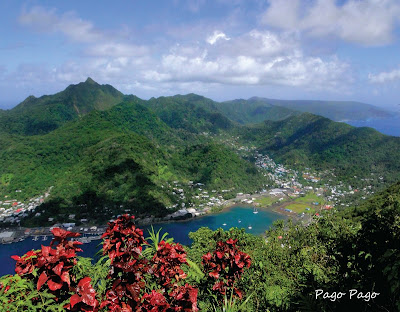 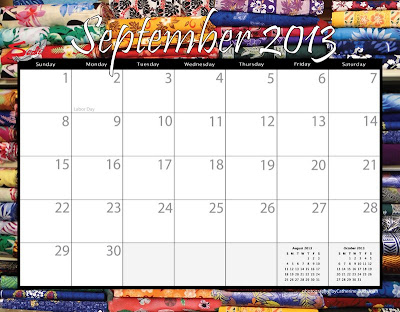 Tom Drabble, the owner of The Sadie Thompson Inn and Sadie’s by the Sea produces a calendar each year. I'll post information about where to purchase 2013 calendars soon.
Posted by catherinebuchanan.com at 10:42 PM 2 comments: Links to this post

No Time for Scrutiny 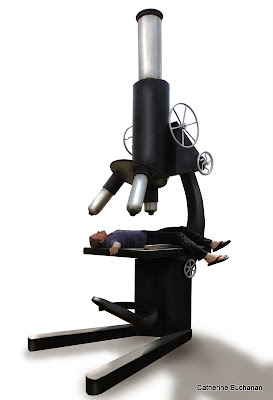 Hindsight is a bitch waving a flaming road flare. My brain is still running circles around Dad’s final weeks. Grief sneaks up on me when I least expect it setting off a torrent of tears. The cemetery where I picked up Dad’s ashes took me by surprise.  Heartfelt despair surfaced like a volcanic gas bubble in a tar pit. One stupid little sprinkler attached to a crusty hose spurted water into a clump of leaning headstones on the failing lawn. The futility of that sad little scene sparked a well of sorrow and I sobbed until I dripped snot. Stepping over broken pavement I got to my car hugging the metal box in a plastic shopping bag.

Dad was as frugal in life as in death. I don’t know what I expected, anything but derelict motor homes lined up outside a bent chain link fence. Maybe they hold swap meets on the weekend to make ends meet. Dad prepaid for the cremation plan and it should have been no surprise that he ferreted out the best deal. The gal behind the counter didn’t try to sell me on any of the dusty urns on the shelves in the lobby even though she looked like nothing would faze her. I liked her, she was genuine. No doubt she could wrestle a rabid bull to the ground, which may be a job requirement in a neighborhood of abandoned buildings, crack addicts and bus conversions unfit for one more trip to Burning Man.

Budget cremation outfits don’t hire handsome guys in Armani suits to fawn over weeping relatives. Tasteful buildings reminiscent of Swiss chalets were notably absent and maybe a total lack of charm was a good thing, although at the time I would have settled for garden gnomes. What better place to experience the overwhelming finality of losing my Dad. Nobody in the vicinity noticed one more person having a lousy day. The anonymous neighborhood, saturated with the misery of hard times, simply absorbed a little more.

A Much Needed Break

My sister and I took a surreal break from reality to visit her friend’s sculpture ranch in Suisun Valley. She’s part of an art show that takes place at the ranch in October, but you’d have to wrangle an invitation from her. The event is so popular they have to control the numbers and just to say, art buyers are given first dibs. Phillip was busy with yet another monumental project so he left us to our own devices, hence the photo op on the giant microscope. Thanks Mernie! 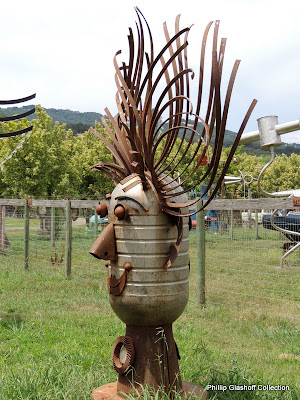 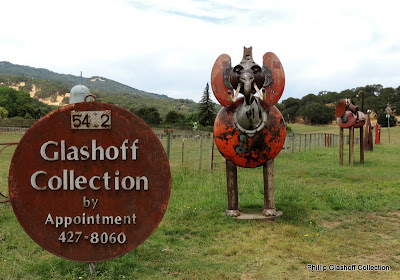 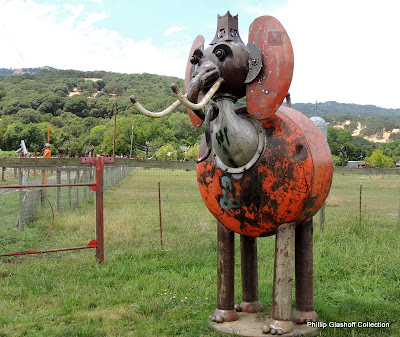 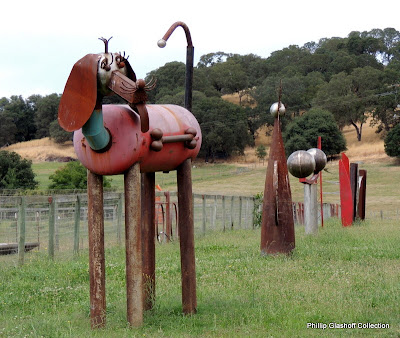 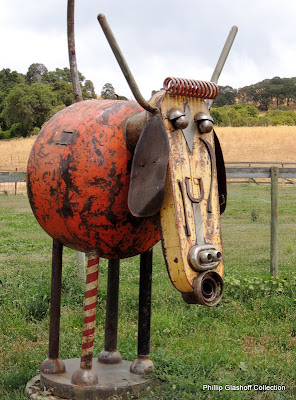 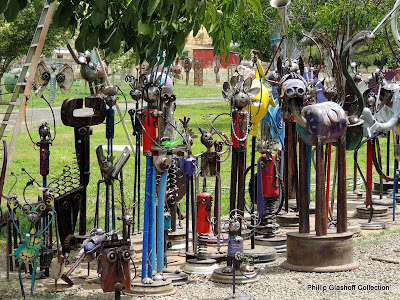 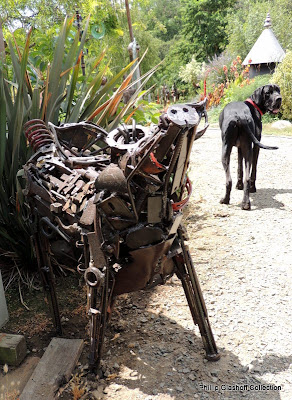 Posted by catherinebuchanan.com at 5:54 PM 4 comments: Links to this post

Good-bye Dad, I sure loved you

My ninety year old father passed away on July 26, 2012 in his own home and it was my privilege to be with him as he departed. I have written personal tomes about my father over the years in therapy journals, more than one fourth step for those who know that process and on my blog in a lifelong attempt to reconcile loving such a difficult, brilliant and complicated person. I am the middle of three children born close together. We all grow up longing for our parents love and approval and have been rewarded or let down in our own ways, not always in equal measure. Our story from innocence to forgiveness, a journey fraught with obstacles, ended for my Dad with peace and grace.
I believe Dad both loved and loathed us as he vacillated between the extremes of his emotions over the course of his life. He was not articulate in the language of feeling so it fell in our individual courts to interpret his confounding behavior. A person in a fit of rage sucks the air out of a room destabilizing everyone. On the brink of insanity anything goes. Love does not trifle with rage. In a room filled with anger fear is a new best friend. When the fever of wrath cools love does not exactly come rushing back. Over time each of those unexpected incidents becomes another stone placed unwittingly on a wall. With parents, there is no divorce. Sure we can walk away and never look back, but I did not. Every time I made the decision to ignore my parents a gaping dark chasm opened before me devoid of the resolve I so desperately needed. Ignoring them simply lacked courage. Dad tested all of us by scattering just enough clues of the love we craved to keep us coming back for more. Had I not suspected his brilliance, played out in a highly successful career as an engineer, or seen evidence that he could suspend his anger and judgment in acts of kindness and generosity to his wife, friends and neighbors I might not have had such an unshakeable compulsion to spend a lifetime examining each of the stones on the wall between us in search of forgiveness for and from him. And I had my good moments with him too. 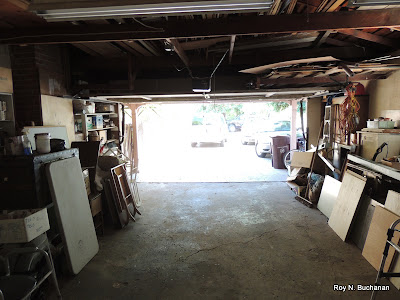 Before he was taken away I had my Mother, who suffers with advanced Alzheimer’s, hold his hand to say good-bye one last time. For a moment, she understood and her grief after sixty five years of marriage and unflagging love for her husband was palpable. Then she closed her eyes and when she opened them again a minute later she asked who the person on the bed was. We will not revisit Dad’s death with Mom in her present state of mind as she would experience the grief again and again as if for the first time. Mom has several loving caregivers now and we will keep her in her home as long as possible. Dad was a good provider and she will be well cared for. We will not be having a memorial service at this time, but will save Dad’s ashes until we can take a boat on the open ocean and scatter our parents together when the time comes. It was their wish and also the kindest thing for Mom. She is not able to comprehend or process condolences. If you knew my Dad, please wish him well and remember him fondly no matter what I have written. The part I have left out is that he was selflessly polite, charming and an asset and friend to the people he worked with. He was respected and accomplished in his long career as a pipeline engineer with Bechtel Corporation.
Dad, I wouldn’t have changed anything and I have no regrets even though I’m sure I could have done better and I apologize again for being such a crappy teenager. Please hold the door open for me, I’d love to see you again after I’ve had a few more adventures.
Posted by catherinebuchanan.com at 12:02 AM 8 comments: Links to this post