I’m still in Mexico, although the following is about two hotels in American Samoa. I lived in the South Pacific for many years and still work with Sadie’s Hotels in Pago Pago. The Sadie Thompson Inn and Sadie’s by the Sea are both great places to stay and in the name of shameless self-promotion, they display and sell my artwork. This time last year I stayed at Sadie’s by the Sea for a month to put my prints up in the rooms and work on their web site www.sadieshotels.com .  I hadn’t been to American Samoa for six years, although little had changed. That’s the up side of the South Pacific; change happens even slower than the pace of life. I used to own a thrift store and when I told people it would take a month or two to get what they were looking for, they inevitably responded with “That soon?”
I hiked to the top of Mt. Alava for photos of Pago Pago Harbor with the Flying Doctors who were visiting at the time. The National Park has recently built trails that are adventure hiking at its best. They wind along the ridge of the island offering views most often seen by soaring sea birds. Most of Tutuila, the largest of seven islands that form American Samoa, rises vertically out of the sea. There is little arable land and most of the population lives along the edges, in many places just wide enough for a two lane road and a few houses. Where the trails climb cliffs that mountain goats would lose footing on the park has installed flexible ladders and provided ropes so you can haul yourself up. The jungle is thick, even the air feels dense as it rains most afternoons. Three days without rain constitute a drought and the foliage actually wilts. The rain is warm though and if you are not easily fazed you’ll fall into the local custom of walking around oblivious and dripping wet until it passes. 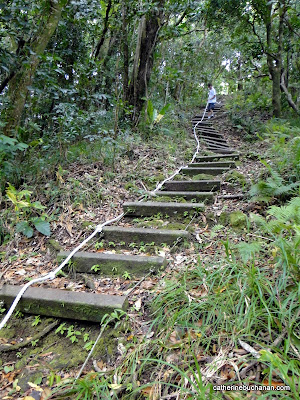 Samoans are not camera shy, the opposite is true. They will break into a run to be photographed. While I was talking pictures  of the staff I caught an employee sprinting into the group shot.
Click on any photo to enlarge it. 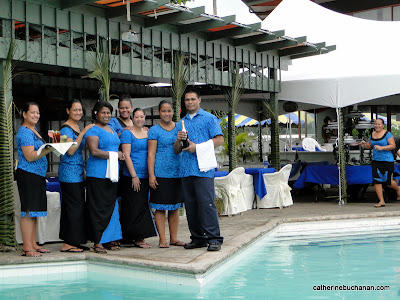 When I arranged with the cleaning staff to take their photos they knocked on my door early the next morning dressed and eager. It might have been the only time they were early for work. When I held up my camera on the street to photograph one of the many colorful hand painted buses the driver slammed on the brakes and leaned out the window to wave with both hands. The passengers all lurched forward, waving and smiling as well. The buses are rolling works of art; hand built on the beds of pickup trucks and painted with characteristic Samoan flair.

When cruise ships dock, usually for just a day, the population in Pago Pago doubles. People hop on tours for an, albeit brief, ride around the island. The owner of this bus is a fan of the movie so he painted the sinking ship on both sides. This day it was filled with tourists fresh off a boat. 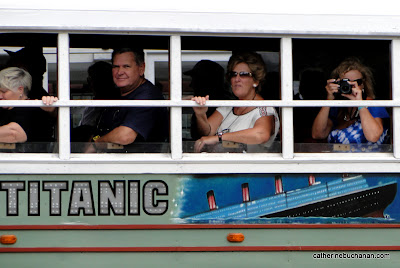 This bus I have no explanation for. 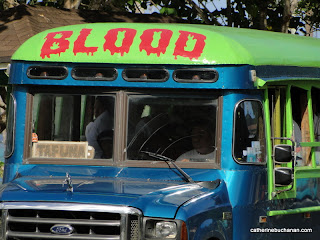 Tom Drabble, the owner of Sadie’s Hotels, first restored the Sadie Thompson Inn and later leased the beach front half of the old Rainmaker Hotel. He did a miraculous job of bringing it back from near total ruin. The other half of the Rainmaker is still a rotting hulk. While abject disrepair makes interesting photos, many people see the old hotel as a disheartening eyesore. I think there are more ghosts in the place than in most cemeteries so I wrote the following after researching the history of Goat Island, the rock the hotel was built on. The web master who created the Sadie’s site was not amused and didn’t post my story, calling what is left of the Rainmaker an abomination, but there is more to the story.
Rumor has it that the ruins of the old Rainmaker are haunted.  Local women used to swim from shore to the naval officer’s club that was perched temporarily on the rock. Origins of the island’s name are unclear.  Possibly it came from sailors who left goats on small islands so they could easily be captured for food, but more likely it was an association with the nickname for Navy personal.  The young women swam through shark infested waters in the dark to the precarious clubhouse to carouse with the officer’s. Why the gals couldn’t walk on the gangway probably had something to do with the surreptitious nature of their visits. Promises were made and forgotten, girls left behind waited in vain for their officer’s to return. More than one heart was broken on Goat Island. The ruins are fenced and entry is forbidden, but there are mysteries to explore. Wet footprints have been seen on the steps of the ruins with no explanation, although some of them were mine when I snuck in to take photos. Still, mysterious wails emit from the structure at night. Some hear laughter from far away, wafting over the surface of the bay when the wind is still. 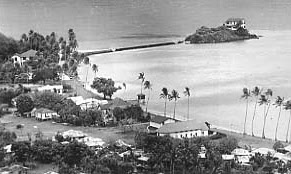 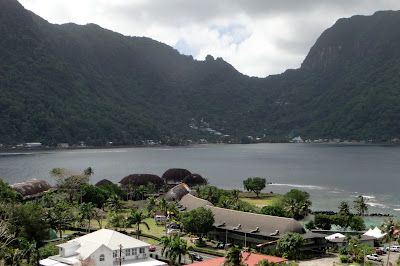 Sadie’s by the Sea and the dark brown roofs of the old Rainmaker Hotel just behind, 2010. The shoals between Goat Island and the shore were filled to create the land to build the hotel.

Goat Island, or the rock that remains, lies under the building on the right. The original Rainmaker was built in 1960. In 2005 Tom Drabble, the owner of Sadie's Hotels, restored forty six rooms to create the modern resort that is Sadie’s by the Sea and the Goat Island Café.
The old hotel buildings are an ambitious restoration project for anyone dedicated to preserving the perfect fusion between British Colonial and Polynesian architecture. It is certainly unique and a treasure of the South Pacific, or so I say. The right developer would need a highly philanthropic spirit with enough capital to rebuild the crumbling foundations that were damaged when an airplane crashed into the hotel in 1980 killing seven people and demolishing an entire wing. They would also have to combat supernaturally tenacious mold and, of course, exorcise ghosts. Tom did a fantastic job with the beach front section, so it can be done. I have another idea though, with a little scrubbing and paint the ruins would make a very cool miniature golf course. 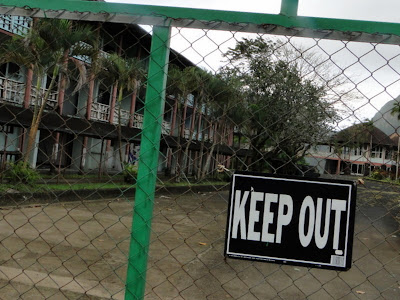 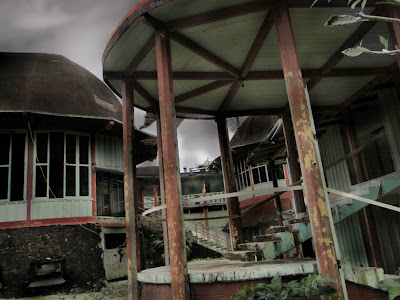 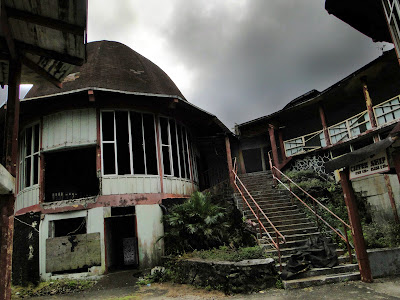 And if ruins with ghosts aren’t enough, there are bats the size of Chihuahuas with three foot wing spans that shriek like cats in heat. I love this place. It’s hot and steamy, people are big and friendly and there are no snakes in the jungle. To see all the beautiful pictures you can stand, check out sadieshotels.com. I took the photos a year ago so they are still current, but I posted the weird stuff here, for people like me. 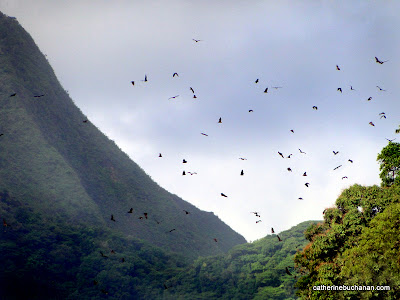 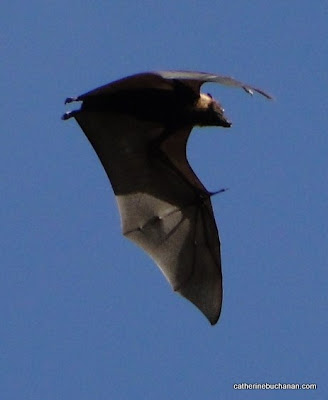 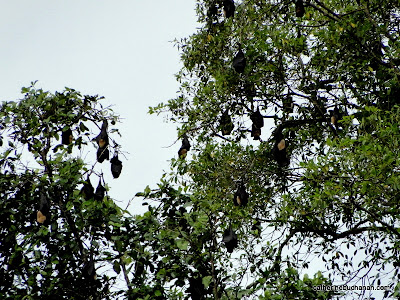 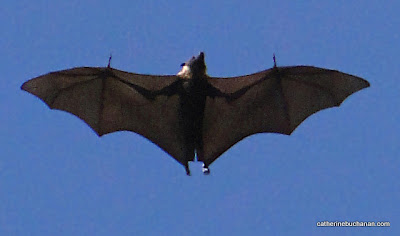 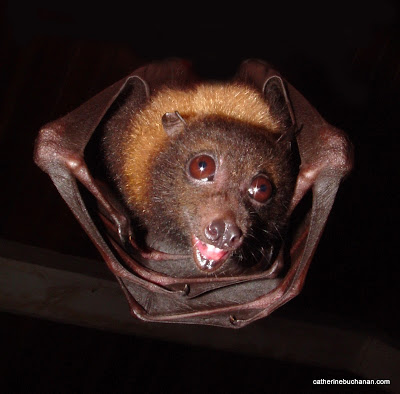