We drove across the country in early spring. Full of dreamy notions about seeing America’s wild places I bought a truck and trailer. Firsts keep life exciting. In answer to my questions about towing a mechanic advised, “Just put the hammer down and don’t look back.” I felt confident ignoring him. Another friend didn’t want me to go without a handgun, but I didn’t shop for weapons either. 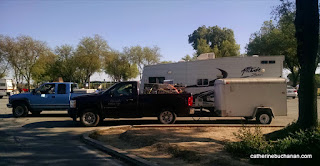 We moved to the Hudson Valley because property is affordable, history is apparent in the architecture and the natural surroundings are strikingly beautiful in all seasons. Now that I’m here people ask with a wry smile, “Why Kingston?” I wonder what they know that I don’t. I suppose people dream about warmer climates coming out of winter into the rain, bug and mud season. Every place has its foibles. It is still cold.
Towing a large trailer is a memorable experience never to repeat. The truck howled going uphill. I wore ear buds to dampen the roar. RV parks are ugly. 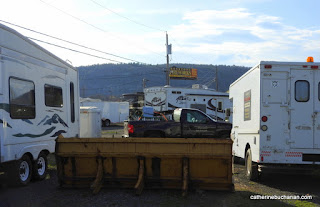 My lousy turning radius limited exploration to truck stops and pull through parking spaces. Longing for stretches of straight level highway is as dull as wishing all coffee cups were Styrofoam. The air in Texas and Oklahoma smelled like cows, either their crap or the wafting aroma of steak houses. The air ripe with bovine misery. I suspected five states of no longer providing driver’s education.   Narrow construction zone cement barriers allowed mere inches on either side of the trailer, some stretching for miles over radically uneven pavement. In Saint Louis a drop in the road shattered a trailer window and my head bashed the headliner.  Adrenalin loses its magic with age. Where it used to provide vigor, it now calls for a blood pressure cuff and a nap.

In Missouri a road sign announced that hitting a highway worker would result in a $10,000 fine. I’m not sure what was most offensive, the audacity of naming the price of a life on a road sign or the hideously low value placed on road workers. We passed several enormous crosses that dominated the landscape, large enough to flatten a Walmart. I launched prayers for improved highway etiquette and longevity for roadway crews. 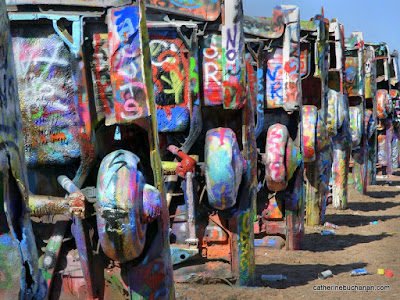 The best sightseeing moment was spotting a roadside sculpture in Texas after replacing the phone that I dropped in a toilet in New Mexico. The original Cadillacs, buried in a field in Amarillo by two artists from San Francisco in 1974, have undergone a surprising transformation. Repainted so often they resembled the texture of tripe in vivid colors.

Hundreds of spent cans littered the ground. The field and roadway nearby tagged with initials added color, but the cars held a presence not undone by anonymous contributors wielding cans. 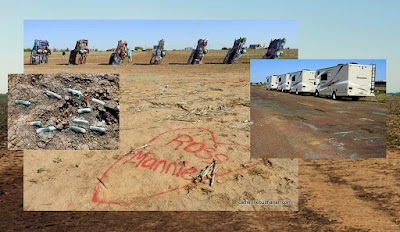 The manly tire store where my phone drowned in their odd little bathroom (decorated in the pastel crafter school) shocked with contradictory merit. The best dinner; a Peruvian inspired restaurant in Springfield, Illinois called Cuzco. Simply amazing food. The restaurant idea and menu inspired by the owner’s trip to Machu Picchu. Great story, murals and they served Faun a plate of shredded chicken that made her eyes roll.

We arrived in Kingston on a sunny day. The excitement of seeing our new place dampened somewhat after finding the ton of junk the previous owners left behind. Mold grew on the walls and we discovered a dirt floor in one room when we took up the carpet. Faun lightened the mood by bolting after a large turkey treeing the bird in under a minute. She trotted back tall and proud. Blue stone rock walls zigzag through the woods. Soggy dips in the forest support numerous terrapin.

Abandoned quarries in the neighborhood create ponds for lollygagging carp Woodchucks shriek, which explains why they are also called whistle pigs.

The old mobile home will eventually be replaced with something from this century. Song birds calling for mates and woodpeckers rattling their brains ring through the forest. Wondering in the woods is a crap shoot as ticks are plentiful this year. The ground did not freeze long enough to reduce their numbers. Lyme disease is all too common making bug spray the cologne of choice in the Catskills. Skin tight white clothing makes ticks easy to spot, but dressed like that I wouldn’t go out of doors anyway. On a nearby hilltop bears are waking in their dens. Surrounded by woodland mysteries makes it thrilling to be here. 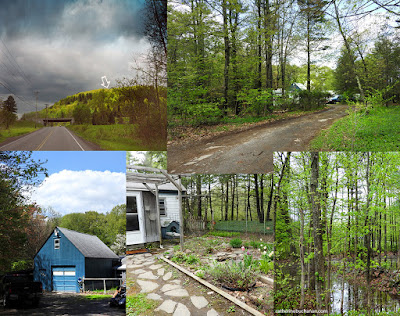 Moving is stressful, although in time routine will replace the upheaval. The travel trailer was a fine idea, only the reality sucked. I could not have known without trying. Videos extolling the virtues of gas guzzling recreational vehicles are made by people trying to sell them. While this might be the worst sales pitch ever, mine is currently available.


Posted by catherinebuchanan.com at 1:36 PM